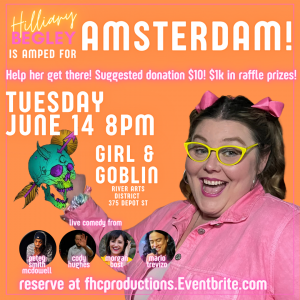 Asheville native Hilliary Begley will headline a comedy show at the Girl & Goblin on June 14.

Asheville native Hilliary Begley will headline a live comedy show on June 14. Enjoy a night of laughter as Begley entertains with her southern charm and sass.

Asheville is where I got my start, and the support of my friends, family, and fans there is something that keeps me motivated as I tour the world and tell my stories.”

Asheville native Hilliary Begley will headline a live comedy show on June 14 at the Girl & Goblin on Depot Street. Doors open at 7:30 pm, with the show set to begin at 8 pm. BYOB and prepare for a night of laughter as Begley entertains her hometown crowd with her southern charm and sass.

“I’m so excited to be coming home from the road,” Begley stated. “Performing in my hometown is always a privilege. That’s where I got my start, and the support of my friends, family, and fans in Asheville is something that keeps me motivated as I tour the world and tell my stories.”

In addition to her touring career, Begley has added some film credits to her portfolio. She played Aunt Lucy in the Netflix original “Dumplin” and was also cast in the award-winning film “When We Last Spoke,” which features Cloris Leachman, Corbin Bernsen, and Melissa Gilbert.

Begley was recently added to the lineup of the Boom Chicago Comedy Festival in Amsterdam, and the proceeds from her Asheville performance will help her get there.

“Hilliary is so talented and such a great comedian,” said Hilliary’s agent Bridgette Martin, who owns fhc productions. “This event is going to be so much fun for our audience. In addition to Hilliary’s amazing performance, we’ll also be giving out more than $1,000 in raffle prizes to those in attendance.”
Voted “Asheville’s Best Comedian” by readers of the Mountain Xpress, Begley will be joined by Asheville comedians Morgan Bost, Petey Smith McDowell, Cody Hughes, and Mario Trevizo.

Girl & Goblin is located at 375 Depot Street in Asheville, North Carolina. The show will be open to adults 18 and up, and a suggested donation of $10 per person will go directly to funding Begley’s trip to the Boom Chicago Comedy Festival.

Raffle tickets are $10 each or 6 for $50. Raffle prizes include gift certificates from Laughing Seed OR Jack of the Wood, Fabulash by Sunshine, Changes Hair Salon with Becca K, and American Nails, as well as a private sporting clay lesson for two at Biltmore, a private four-hour fly-fishing lesson for two at Biltmore, a private full-day rafting trip on French Broad for up to six people with Ryan Charbonneau, and original art from both Hayley King and Alli Good. In addition, the Girl & Goblin will provide a mystery prize.

Begley is represented by fhcproductions.co, which produces comedy shows in the Asheville area and provides booking agent services for incredible talent.