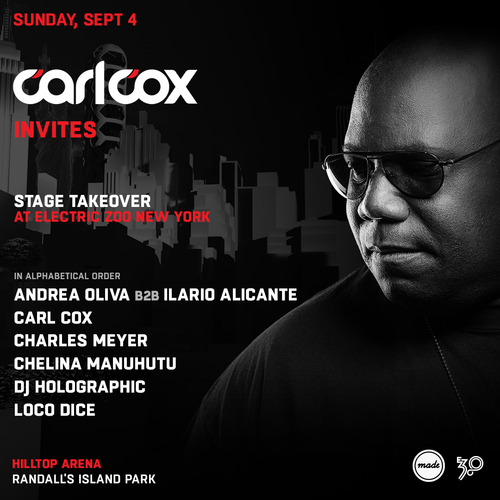 “I cannot believe it’s been 11 years since I was last there for Ezoo. Wow!! Mind blowing right? I have great memories of being there the last time, and I remember how amazing the crowd was towards my music even then.” – Carl Cox

It’s been over a decade since Carl has played EZoo and this year he’s treating dance music aficionados to a very special house and techno fueled lineup featuring Detroit’s DJ Holographic, known for delivering a mix of musical cuisine that combines House beats, passionate R&B, Hip Hop, unreserved Disco, true Detroit Techno, and Motown. “DJ Holographic has so much house music soul and true techno flavor in the music she plays. It draws you in the longer she plays. It really does come from the depths of her heart, you can feel it so much. This will be the first time I will get the chance to see her live, and I for one cannot wait.”

Carl is bringing back a close friend who he frequently shares the stage with, Loco Dice. It’s also been 11 years since Loco Dice has performed at Electric Zoo, making this reunion all the more special. “Dice is always evolving with his sound of music that you cannot put in a musical box at all. He really does push the boundaries, which makes me excited to hear what he will pull out of the bag next.”

NYC’s tech house ambassador Charles Meyer has a natural aptitude for giving partygoers not just what they want, but also what they need, making him a perfect addition to the stage. Joining all the way from the shores of Ibiza is Chelina Manuhutu, a talented, strong and exotic feminine force and one of the most exciting artists in the underground music global scene. Carl will be showcasing new music off of his highly anticipated forthcoming album, ‘Electronic Generations‘, to the Ezoo crowd this year. “100% yes on the crowd listening and dancing to my new music from my album! I road tested a few from the album to see the reactions, so fans have been dancing to my music without even knowing it was me.”

Topping off the Carl Cox Invites stage will be Andrea Oliva B2B Ilario Alicante. Andrea Oliva has earned himself a sterling reputation over his 25 year career. He continues to command the stage at Ushuaïa throughout the summer, headlining one of the island’s most popular parties. Ilario Alicante’s rise has been nothing short of meteoric, known for slinging sizzling house and techno sets across the biggest festival stages. Together, Andrea Oliva and Ilario Alicante are poised to deliver an unforgettable set for EZoo fans. “I cannot wait to see these guys go at it for maximum dance floor impact. They will have so much fun working with the crowd playing a lot of their own music edit and original tracks. They are going to light it up!!!”

Carl Cox is a living legend whose passion for dance music emanates from all that he does. House head or not, stopping by the Carl Cox Invites stage is a must for all who attend EZoo this year.

“I have been curating line ups now for many years now, and for Ezoo, I wanted to have a very special line up, which was all about the music that each DJ Artist represents. I know that this will be an amazing time for all that will see and hear us play, something which the party people in NYC will appreciate.” 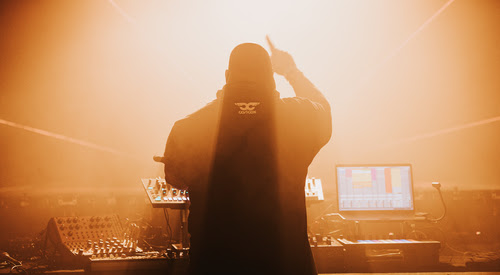 Established in 2009 by Made Event, the internationally renowned Electric Zoo Festival is one of New York City’s largest music festivals and features the top names in electronic music, bringing a wide variety of acts from around the world and across the spectrum of electronic music’s various sub-genres. International editions of Electric Zoo have taken place in Mexico City, Tokyo, Shanghai and São Paulo.

Carl Cox is one of the most charming DJs in the business. A musical ambassador and a veteran of acid house, a champion of techno, a dance music pioneer, label owner, King of Ibiza – you name it, Carl’s been there and done it, never losing sight of his passions – playing music, breaking tunes and celebrating life. Carl recently started an exciting new chapter signing to BMG as a recording artist, releasing his first single Sand Moon and Stars in summer 2021. Carl has taken his production to a whole new level, performing as a live electronic artist. 2022 will see the release of the first of three albums for BMG, coming out late summer and with the first single Speed Trials on Acid out in the Spring.

Amber Heard Reveals Evidence That Would Have Left Impact With Jury