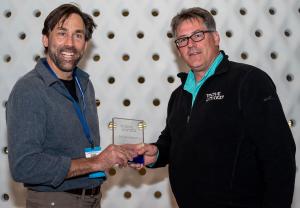 Erik is shifting the way people view disability through his own work. But he is also pushing others to understand what they are capable of so they too can live a no barriers life”

Weihenmayer has transformed the image of blindness and opened up the minds of people around the world. On May 25, 2001, Weihenmayer became the first blind climber in history to reach the summit of the world’s highest mountain, Mount Everest. Seven years later he reached the summit of Carstensz Pyramid in Papua New Guinea, completing his quest for the Seven Summits – the highest peaks on each of the seven continents.

As word spread about Weihenmayer’s remarkable achievements, the world took notice; shortly after his summit of Everest, he was honored with a Time cover story detailing his conquest of the world’s highest peak. In 2014, he also kayaked the entire 277-miles of the Colorado River through the Grand Canyon.

Weihenmayer has helped others shatter barriers in their lives by co-founding the nonprofit organization No Barriers. In addition, he is the author of “Touch the Top of the World, The Adversity Advantage” and “No Barriers” and been featured in films including “Blindsight” and “High Ground.” Whether it is through his own accomplishments, helping others overcome their own barriers to reach new heights, or the books, films, and other projects that have entered the mainstream, Weihenmayer is shifting the narrative so that these accomplishments are no longer a surprise and provided extraordinary leadership in this space.

In 2012, Move United’s board of directors created The Dr. Robert Harney Leadership Award to honor a company, organization or an individual that has demonstrated and provided extraordinary leadership in the Adaptive Sports Movement. The award’s namesake. Robert Harney, or “Dr. Bob” as he was affectionately known, was an adaptive sports pioneer and tireless leader in Paralympic sports at the local, national and international levels. He was an innovator in the national and international medial classification of athletes with disabilities. As a volunteer, Harney was on the International Paralympic Medical Classification team in the sports of alpine skiing and cycling and attended every winter and summer games since 1998 until his passing in 2012. Dr. Bob was also a Professional Ski Instructor and was a founder and past president of New England Disabled Sports. For over 25 years, he was a well-respected orthopedic surgeon in Boston, serving as the team physician for two local high schools and past president of the American Academy of Sports Physicians.

Harney served on various boards of directors, including Move United’s as vice president. More than these accomplishments, Dr. Bob was a gracious, generous man who saw the greatness in people of all abilities and encouraged everyone he met. He was a visionary, true mentor and dear friend to many in the adaptive community.

“Erik is shifting the way people view disability through his own work. But he is also pushing others to understand what they are capable of so they too can live a no barriers life,” said Move United Executive Director Glenn Merry.

To learn more about Move United’s adaptive sports awards, including a list of past award recipients, visit https://www.moveunitedsport.org/sports/adaptive-sports-awards/.