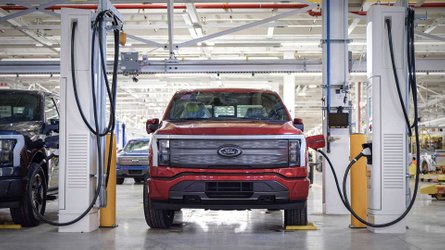 Ford announced that F-150 Lightning customers will benefit from more power and payload capacity and range than they expected from their trucks.

According to the company, the final production version will soon enter the market and offer better specs than originally targeted and announced when the truck was revealed in May 2021.

The third positive change is more range – but in this case, we don’t think it’s new info. That’s because Ford highlights up to 320 miles (515 km) of EPA range in some of the trims (XLT and Lariat) of the ER version, compared to the target of 300 miles. We’ve known about that for over a month.

Nonetheless, it’s always great to hear that the final product is better than the initial specs released at the unveiling.

Ford is now busy preparing customer deliveries of the first vehicles, starting with the Pro Series (for fleet customers). The company also promises continuous improvement to the vehicle.

“We were seriously focused on raising the bar on this truck, including after we revealed it, so we can deliver more for our customers. And our drive for continuous improvement will get a big boost when we start getting feedback and ideas from customers when they receive their Lightnings.”

Meanwhile, Ford already is working on a next-generation electric pickup model (separate to the F-150), which potentially might offer a range of over 400 miles (644 km).

Dramatic start of the season saw ups and downs. Calvet was a star, with Lacko unlucky.