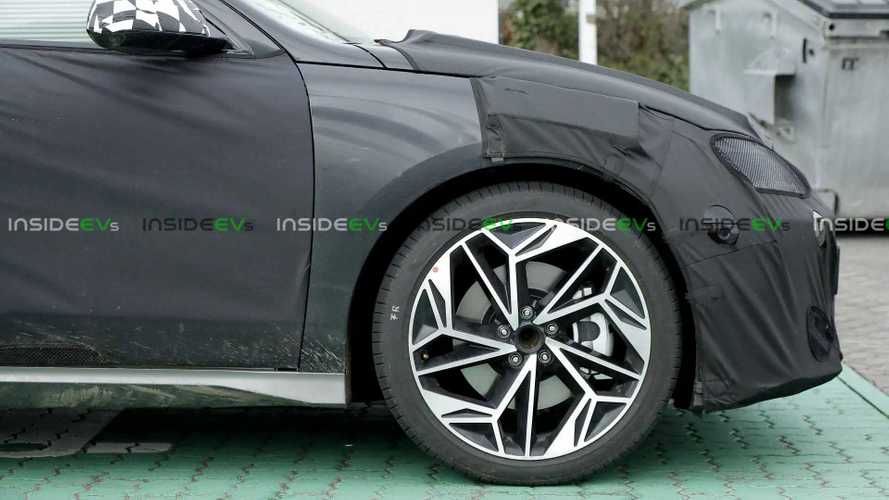 With its sights firmly set on the Tesla Model 3, the Hyundai Ioniq 6 a hugely important new electric sedan. Previewed by the stunning Prophecy concept, it has been toned down quite a lot for production, but it’s still expected to have quite an unusual exterior design – its interior, which we’ve already seen via leaks, is predictably similar to what you can see in an Ioniq 5.

Hyundai has been testing camouflage prototypes out on public roads – first in Sweden, now more recently in Germany and in a recent video sent to us by our spies, we actually get to see Albert Biermann next to and in a camouflaged Ioniq 6 prototype.

The video is mostly comprised of static and driving footage of the Ioniq 6 being chased by the camera, but at 1:29 you actually get to see Mr. Biermann have trouble unlocking the rear door to leave his jacket on the back seat, before climbing into the driver’s seat (giving us a good look at the door card) and driving off.

Hyundai’s famed R&D boss, now 65, stepped down from his position late last year, having held it since the since 2014 when he was poached from BMW Motorsport, infusing the group with new energy and being instrumental in the creation of the Genesis luxury brand and the N performance badge. Currently, he has taken a more symbolic role in the company as an Executive Technical Advisor.

But it was not just Biermann that changed Hyundai, it was also Hyundai that changed him. In the press release announcing his retirement, he is quoted as saying

Korea will remain as my second home, and all of my colleagues at Hyundai Motor Group will always be considered part of my family. I would like to recognize that our success has always been based on the strong collective spirit of the many talented people at Hyundai and I will value our unique achievements wherever I live.

His commitment to delivering the very highest engineering standards has played a key role in our Group becoming one of the top global automotive leaders. Thanks to Albert’s tireless efforts, unwavering dedication and prodigious passion for the company, we have been able to achieve many great accomplishments across our vehicle lineups that it would be impossible to name them all.

Now in case you are wondering why he is driving an Ioniq 6 prototype even though he is no longer R&D boss, well, it’s because the new EV was developed under his technical leadership, so he oversaw its creation. This model’s importance can’t be understated, so he’s probably giving it a final seal of approval – if he finds something wrong with it now and says it should be changed, his title within the company won’t really matter as much as the value of his feedback.

Expect to see the Hyundai Ioniq 6 debut sometime this year – possibly at a major motor show – before going on sale in early 2023 around the world. Pricing in the US should start from around $45,000, or a few thousand more than the Ioniq 5 tall hatchback.