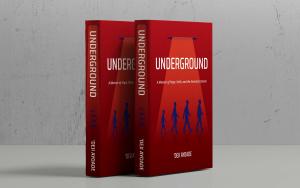 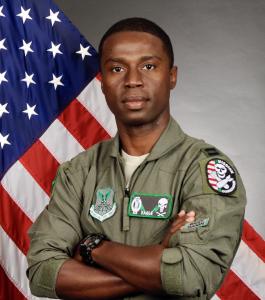 Ayoade is first African immigrant to serve in three branches of the U.S. military

BROADLANDS, VA., UNITED STATES, May 5, 2022 /EINPresswire.com/ — From being raised in poverty in Lagos, Nigeria to becoming the first African immigrant to become a nuclear missile operator in the United States Air Force and serve in three branches of the U.S. military, Ramon “’Deji” Ayoade embodies the American dream.

He is telling his remarkable story in “Underground: A Memoir of Hope, Faith, and the American Dream,” a 400-page hardcover volume that will be published in December.

Ayoade has launched a Kickstarter campaign for his memoir, kickstarter.com/projects/undergroundproject/the-underground-project?ref=9qik43

“Underground” recounts Ayoade’s horrific childhood in rural Lagos, Nigeria, where, as a seven-year-old he would hear the clamor when his father came home drunk.

“As I always did when I overheard this, I’d freeze, hiding in the dark just hoping everything would eventually quiet down—and hoping even more urgently that my mom would be around when we woke up. On mornings when she wasn’t home, we knew the abuse had been so severe that she’d had to go to the hospital.”

His journey takes him from his poverty-stricken home to Nigeria’s University of Ibadan, where he graduated in 2005 as a Doctor of Veterinary Medicine. In 2008, he received a graduate scholarship to the Heller School for Social Policy and Management from Brandeis University and graduated in 2009 from the Keller Graduate School of Management in Maryland.

In 2011, at age 31, Ayoade joined the United States Navy and became an American citizen.

“Yet, since my childhood, I’d been committed to one main principle. As a new immigrant in America now about to have a child in this country, I asked myself, What can I contribute to a country that I need so much from? I knew there was plenty I could do with my background, and maybe I was still being haunted by my upbringing … but I’d grown convinced my purpose was bigger. I had to be out there. I had to touch people’s lives,” he writes in “Underground.”

“Despite the quest for the American dream, I understood the real journey was my pursuit of happiness. Also, if I would proudly call myself an American in the future and relocate my family to the U.S., there had to be a way to prove my devotion and loyalty to the U.S. It felt right to serve and commit to some sort of ways, which I didn’t quite figure how to do on time. All I knew was that it hadn’t always and only been about money for me. Despite my fervent desire for my family to be comfortable, I sought personal satisfaction with my life. To serve humanity in return for my life.”

It was in 2015, while Ayoade was 70 feet below the earth, operating the world’s deadliest weapon as a nuclear missile operator, that he began to write the accounts of his journey that became “Underground.”

“I remember the promise I made to myself to pay forward the kindness and generosity many have shown me since I immigrated to the U.S. I also thought of how those actions have turned the dreams of the seven-year-old me into reality,” he said.

“I began to write the accounts of my unusual journey from childhood in Nigeria to where I am today. How the impossible became possible, how I had survived near-death experiences where most people around me weren’t so lucky, and how I was willing to sacrifice my life to protect and give my family a better life. These are true stories that my American-born children would find hard to believe, as well as are most Americans,” said Ayoade, a senior program analyst at the Office of the Deputy Chief of Space Operations for Strategy, Plans, Programs, Requirements and Analysis, Headquarters U.S. Space Force, Pentagon.

Before taking on a role as a Space Force analyst, Ayoade served with the U.S. Air Force’s Deputy Chief of Staff, Strategic Deterrence and Nuclear Integration at the Pentagon as a Nuclear Weapon System Subject Matter Expert. He also served as Mission Lead, Missile Combat Crew Commander in the United States Air Force.

“As the first African immigrant ever to hold my position in the U.S. Military, ‘Underground’ is my story of the American dream. Some people try to forget their past, especially the bitter parts. I prefer to hold on to every moment. Like the eyes of those who don’t know me, my memories follow me everywhere. Good or bad, they’ve all brought me here. Stories of overcoming the odds heal those who tell them and those who hear them. These stories are powerful reminders of who we’ve been, who we are, and, if we allow them, who we have the potential to become,” said Ayoade, a married father of two.

“Underground: A Memoir of Hope, Faith, and the American Dream” is being offered in three formats, depending on the tier supporters choose to pledge: signed and unsigned editions available as premium paperbacks and hardcovers and as a digital eBook available for download in December.

The 6 x 9-inch premium hardcover books are destined to become collector’s editions. Each one will be approximately 400 pages with a matte laminate dust jacket. Each of the four sections of the book will feature black and white and color photographs with customized-designed chapter headings.

To learn more about Ayoade and to see some of his writing, visit dejiayoade.com.

The Los Angeles Times Festival Of Books of 2022 presents, The Origins of AIDS and Autism