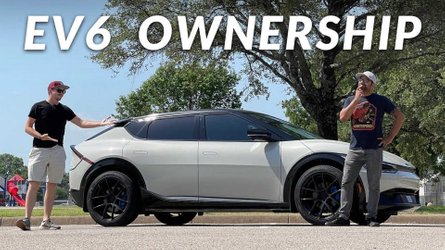 The Kia EV6 is, at least on paper, a seriously compelling package. With plenty of range, rapid charging speeds and great tech there’s a lot to like about Kia’s latest EV. But what’s it like to live with in reality? Jordan from Out Of Spec Reviews spoke with EV6 AWD owner Emad to find out.

Emad has owned his EV6 for a number of months and has already driven a few thousand miles in it. He’s made several aesthetic modifications, including adding 20″ aftermarket alloys and wrapping part of the car in black. He refused to pay over sticker for his EV6 and bought it out of state to ensure he paid MSRP. The only other car he was considering instead of the EV6 was the Polestar 2, but he felt the Kia came better equipped as standard. However, he might switch to the 576 hp EV6 GT when it goes on sale later this year.

Gas savings were one of the key reasons why Emad decided to make the switch to electric. He finds charging at home to be super easy. Like most EV owners, he predominantly charges at home and doesn’t care about not having access to the Tesla Supercharger Network. On the rare occasion when he needs to charge on the road, he found the non-Tesla infrastructure to be quite good.

The EV6 is capable of OTA (Over-The-Air) updates, but he stated none of the updates have been OTA so far. He has to download the update onto a USB drive and plug it into his car.

Emad predominantly does city driving and has found the EV6’s real-world range to be very impressive. He gets close to its 274-mile EPA range and has never had any issues with range anxiety.

Overall Emad is super impressed with his EV6 AWD and does not regret choosing it over one of its many rivals. It says a lot when the only vehicle he’d consider swapping it for is the EV6 GT.

Cuban migrants attempting to cross into U.S. at southern border with Mexico in record numbers

HotWax Baltimore Expands and Rebrands as Business Continues to Grow