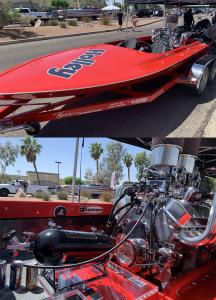 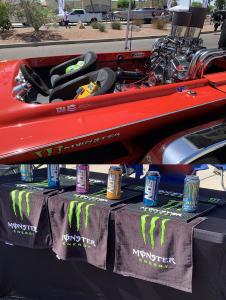 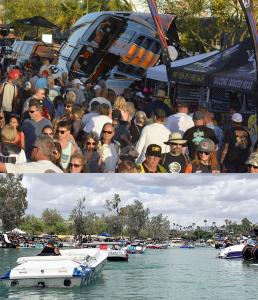 It’s amazing to be a part of such an iconic event that brings together the world’s finest offshore and performance boats.”

LAKE HAVASU CITY, AZ, USA, April 26, 2022 /EINPresswire.com/ — Kwan International, a global marketing, media and branding company located at the Las Vegas Motor Speedway, debuts its long-awaited fully restored custom-built 1973 Challenger Jet Boat at the annual Desert Storm Shootout Street Showcase in Lake Havasu City, AZ. The jet boat had traveled an incremental path of restoration from the outside in, starting with a hull reinforcement that was finished with a Viper-red gel coat. In subsequent years, as the boat restoration project sidelined, company owner Christina Kwan embarked on completing several other performance build projects along with a focus on building Kwan International’s presence in the motorsports industry. When the boat project came back to focus again, top performance racing industry sponsors were enlisted including Holley, Aeromotive Fuel Systems, and Williams Motorsports Wiring Solutions to be a part of the build.

“Being a part of the Desert Storm event is a monumental moment for this project build,” said Kwan. “It’s amazing to be a part of such an iconic event that brings together the world’s finest offshore and performance boats that are capable of running over 180-mph including 44-foot DCBs, 43-foot MTIs, and a 50-foot Nor-Tech.” With over 30,000-plus in attendance, the Desert Storm Event Weekend featured a Parade of Boats that saw a packed scene at the iconic London Bridge with a Poker Run and Shootout to follow with over 200 boats, many with their own chase helicopters. Desert Storm was kicked-off with the traditional annual street party showcase from morning through into the night where main street McCulloch Boulevard was closed in both directions, clearing the way for all of the event’s participating boats.

Kwan’s jet boat was well-received by curious onlookers at the street showcase, many appreciating the nostalgic Challenger’s modern build. “The original vision for this jet boat has been far surpassed as time went on. Originally, we didn’t plan for such a high-performance build, but anyone who has completed these kinds of projects know that it never ends, and you always want to do more, and be more.” The jet boat is also built to drag race and is outfitted with a BBC with a Holley tunnel ram, Holley dual 1050 Dominators, Aeromotive fuel system, MSD crank trigger and ignition, AFR heads, and Holley’s Big Shot NOS system.

Kwan’s marketing company specializes in the automotive, aftermarket, and motorsports industries which is the reason for continuing to produce custom-built performance projects. A familiar face in the industry, Kwan has served on the SEMA Board of Directors Youth Engagement Task Force and SEMA Businesswomen’s Network Committee while also being featured as SEMA Education seminar speaker at the annual SEMA Show. “As a woman in the industry it’s especially important to showcase authenticity,” said Kwan. “It’s not only working within the industry, but also showing your own skills in performance builds.” Kwan is also a familiar face in the industry for her work in representing US manufacturer Race Ramps since 2014. Many have seen her at the Race Ramps exhibit at the PRI Show and SEMA Show handling their event management. She handles Race Ramps’ marketing, public relations, and national and international distributor relations/sales. “I’m fortunate to be able to work in an industry that is also the center of my life’s passion,” said Kwan.

To date, Kwan International has completed several performance projects including a C5 Corvette which showcased twice at the SEMA Show, a Hyundai Veloster N, and multiple performance 2-stroke dirt bikes. Kwan hails from an unlikely sports background as the former United States National and World Champion in boxing in the 95-lb weight division. “Most are surprised that I come from boxing,” said Kwan. “I’m especially interested in showing all of the different paths I have and can travel beyond the sport.” Diversity is key for Kwan and her company as she credits Vinny Perozzi for introducing and teaching her the skills of boxing and performance engine building. “Vinny brought me from the ground level in boxing and all the way up to the championship level,” said Kwan. “But his immense talent beyond the sport of boxing was the catalyst for all that we’ve built together. He’s a true visionary of the creative approaches we’ve taken in all of our endeavors.” The duo has been accomplishing feats together for over 20 years and their best may still be to come.

Kwan also became the first boxing champion to cash in a World Series of Poker Event and has since cashed again. An alumnus of the University of Nevada, Las Vegas for her undergraduate degree, she is currently completing her MBA at the University of Nebraska, Lincoln and will be graduating this Fall. “There’s so much more that I want to accomplish,” said Kwan. “Being a part of the Desert Storm event feels gratifying because the boat has been the longest project of them all. We couldn’t have done it without all of our great partners.” In addition to Holley, Aeromotive, and Williams Motorsports’ support, Monster Energy also supported with supplying cases of their top flavored energy beverages which also included NOS, a brand within the Monster Energy family.

A successful debut for the Challenger Jet Boat, Kwan will continue to add a few more components before taking it out on the water to test. The future entails participation in more events including race events. “We were meticulous in making sure that the engine was aesthetically on point. Next, we have to get this engine dialed in and we’re excited to see how it performs on the water,” Kwan concludes. Coming from a boxing background, Kwan’s ventures outside of the sport can be a surprise to many, and she is determined to continue achieving feats that no other boxing champion has accomplished before.

Trump suspends all travel from Europe to U.S. for 30 days amid COVID-19