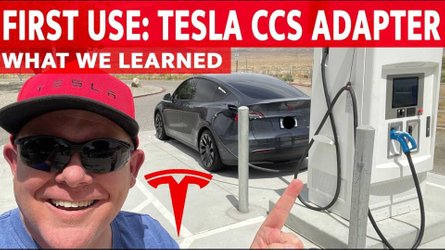 Kerry from YouTube channel Tesla Tips & Trips got ahold of Tesla’s official CCS Combo 1 Adapter. He uses it for the first time to charge his Tesla Model Y on a recent road trip. In the video above, Kerry shares what he learned during the first use, mistakes he made, and other tips to help Tesla owners who plan to use the adapter.

Tesla Tips & Trips recently headed out on a road trip from Los Angeles to Mammoth, California. Kerry notes that there will be a full video about the trip published soon. However, he decided to make this shorter video with a specific focus on using Tesla’s CCS Combo 1 adapter, which allows Tesla owners to charge at non-Tesla fast-charging stations.

Kerry opens up the box that includes the official CCS Combo 1 adapter to charge at a rest stop that’s free. He attaches the adapter to the charging station’s cable first before connecting it to his Tesla Model Y. Kerry admits that he’s not positive this is the correct method, but he’s trying to help potential users understand the process and potential issues.

As you can see, the adapter is pretty big and bulky, and it seems to be a bit of a struggle to get it connected to the charging cable. As Kerry attempts to put it into the Model Y, there’s a pin that keeps it from fully engaging. He decides to remove the adapter from the cable and put it into the car first, which seems to help him get it fully connected, though the pin appears as if it’s in the way, and the adapter isn’t flush.

Regardless, the charging briefly initiates, but then it stops. Kerry has to make sure all the connections are fully engaged before the Model Y begins charging successfully. As it turns out, he was initially correct about the order of operations.

Check out the video to learn more about the seemingly strange connection and pin, as well as the details related to the charging session itself. It’s important to note that the pin is actually a security feature that prevents the CCS cable from being removed from the adapter when the adapter is in the car.

Have you used Tesla’s official CCS Combo 1 adapter? If not, how about an unofficial version? Share what you know in our comment section below.