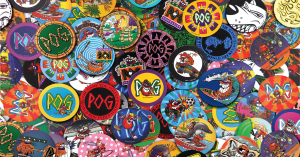 THE GAME YOU COLLECT

is a decentralized NFT-based ecosystem, officially endorsed by The World POG Federation

, the wildly popular game and collectibles brand of the 1990s.

Back in the 90s, POG game pieces were millennial currency and slammers were playground status symbols. Wildly popular, “POG, the Game You Collect” sparked a worldwide craze for kids to collect, trade, and play. From 1994 to 1998, over 10 billion POG pieces were sold in over 30 countries.

Now the old-fashioned, 100% Authentic POG cardboard coins are back in the form of POGART (POG NFTs) so that anyone can collect, trade, and play to earn POGART throughout this decentralized ecosystem called THE WORLD POGGER FEDERATION

. This will be a cross-platform, economy as a service in which our NFT-based game assets will be found and used within an ecosystem of games and experiences throughout the Web3 metaverse starting on SOLANA.

will provide our favorite global brands an opportunity to engage our community using their most nostalgic content from the 90s. Allowing them to mint their own POGART NFT COLLECTIONS to be used throughout Web3 gaming.

to complete your set and earn new POGART.

Additional Info:
POG, The Game You Collect, was the first game and collectible sold as trading cards. POG discs featured artwork from POGMAN

GENERATION represents a group of ~100 million millennials who are now 30 – 40 years old. This group played and collected POGs in the 90s and grew up with video games and an online world. For us, The POG Game​ has always been associated with an exciting game on one side and a collectible of various Entertainment Brand IPs on the other side. Since NFT’s most common utility focuses mostly on gaming and collecting, The POG Game​ will have a natural legitimacy in the NFT market. Now is a perfect time as Web3 approaches critical mass. This platform will be aimed at casual collectors and gamers but will be robust enough for sophisticated blockchain gamers.

More information can be found on our website at www.POGDIGITAL.com

The Game is on

Hear pollsters’ warning for the US after a ‘stunning’ new poll