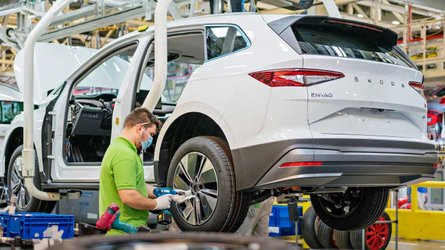 Good news comes from the Czech Republic, where after several weeks of downtime, Skoda Auto has resumed production of the all-electric Skoda Enyaq iV model at its main plant in Mladá Boleslav.

The production stopped due to supply bottlenecks – specifically, cable harnesses from Ukraine, which was invaded by Russia. A similar issue was reported by many other automotive manufacturers/plants in Europe.

Skoda explains that it has managed to restore the supply of the essential components, enabling production to be restarted.

The initial production rate is 1,000 Skoda Enyaq iV per week and it’s expected to gradually increase over a two-month period. The long term goal is to produce up to 370 Skoda Enyaq iV and Skoda Enyaq Coupe iV per day, which suggests 1,850 units when assuming 5 days per week.

Unfortunately, the situation in Europe is very dynamic and there is no certainty that there will not be more interruptions.

“ŠKODA AUTO’s long-term goal is to maintain full production capacity. However, this is dependent on the availability of specific parts, and it is currently not possible to make predictions about the supply chains.”

Nonetheless, it’s a positive sign that Skoda and the broader Volkswagen Group is solving the critical supply issues.

The Skoda Enyaq iV is a direct cousin of the Volkswagen ID.4 and Audi Q4 e-tron. It’s also the only MEB-based model in Europe that’s manufactured outside of Germany.

In Q1, Skoda sold about 8,800 all-electric cars (up 260% year-over-year). Several weeks of pause could cost the company at least several thousand Enyaq iV, maybe even over 10,000 (partially in Q1 and partially in Q2).

That’s really unfortunate, as the Skoda Enyaq iV was actually one of the best selling new all-electric models. From time to time, it was ahead of the Volkswagen ID.4, depending on particular market.

The queues of customers waiting for new electric cars are usually pretty long and any disruption to the supply chain adds on top of all of the other general economic issues.