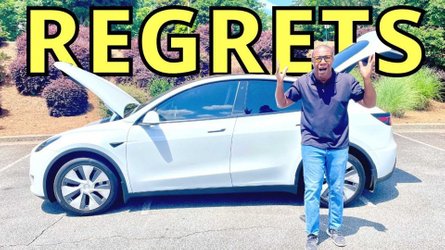 The Tesla Model Y is often hailed as the best electric crossover on sale. However, it still has its problems. YouTuber Just Frugal Me recently outlined a few issues he has found with his Model Y.

The Model Y is prone to phantom braking. When in Autopilot it can also brake too abruptly at times, despite having plenty of warning of objects ahead.

The Y isn’t built like a $60,000+ car. There’s plenty of fit and finish issues, with a few trim and panel gaps. There’s also a lot of road noise with the windows being poorly insulated.

A minor problem, but your phone has to have the Tesla App open to unlock your car.

The front trunk is manual, not electric. Again, a small issue but it annoys Just Frugal Me.

It’s too small and rear visibility is poor as a result.

You have to use the central screen to hang up the phone. You can’t just press a button on the steering wheel like in most cars.

Autopilot sometimes fails to recognize oncoming cars and can turn on the high beams when the lights really should be dimmed.

Despite the above, Just Frugal Me is still very happy with his Model Y. All of the problems mentioned are minor issues and not serious flaws.