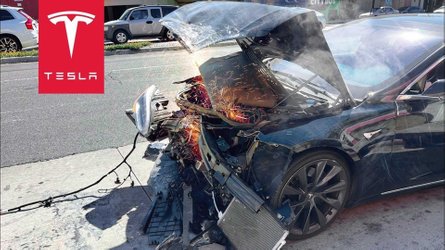 As you’ll learn from watching the video above, this Tesla Model S was totaled in a head-on crash with a red-light runner. The built-in dashcam (TeslaCam) footage proves the Tesla driver’s innocence.

When it comes to car crashes, it’s not always easy for the authorities to figure out who was at fault, and this can cause complications when it comes to dealing with your insurance. Typically, both drivers have a story, and it wouldn’t come as a surprise if the stories were different.

For this reason, the police at the scene not only have to rely on details from the stories, but also clues from the scene. Perhaps more importantly, they can ask other witnesses what happened, as long as there are actually witnesses to question. However, if someone has dashcam footage, it can help immensely.

That said, all of Tesla’s vehicles come standard with a built-in dashcam coined “TeslaCam.” In the TeslaCam clip shown in the YouTube video above, you can see that the Model S driver had to complete a left turn on red. The light changed while he was in the intersection waiting to turn. He checked to make sure no one was coming before completing the turn. However, an oncoming car ran the red light and hit the Tesla. Fortunately, despite the severity of the crash, no one was hurt.

There are many other interesting clips in the video above, so be sure to check it out. As always, once you’ve had a chance to watch the video, scroll down and leave us a comment. Do you own a Tesla with TeslaCam? If not, do you have an aftermarket dashcam? Finally, do you think all cars should offer built-in dashcams?

The post TeslaCam Footage Used As Evidence first appeared on .