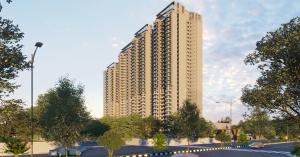 GHAZIABAD, UTTAR PRADESH, INDIA, April 26, 2022 /EINPresswire.com/ — From T-Homes to DigiTown: The Journey of ‘Digital Housing’ in the Indian Real Estate Market So Far

The Indian housing market has long been fairly traditionalist in its approach. From building homes to selling them, the industry cannot be said to have come significantly far from its nascent days in the country and remains notoriously old-school in so many ways. At the same time, a lot has changed in recent years about the segment of buyers that it aims to cater to. Homebuyers have now become largely tech-centric and expect – from one of the least tech-savvy industries – more efficient homes that will accommodate their modern lifestyles, thereby creating a big gulf between need and provision of housing services in the country. In 2018, one of the first steps towards addressing this growing vacuum was taken by T&T Group. The company sensed the growing discontent among homebuyers caused by the indifference of housing developers towards making significant attempts to build projects driven by their changing needs, and soon introduced T-Homes, India’s 1st Digital Housing, to the market.

T-Homes was quick to break the monotony of traditional-style homes in Delhi-NCR with its concept of Digital Housing. Taking inspiration from the IoT (Internet of Things) technology, it tried to combine the power of innovation with the tradition of homebuilding so as to make homes that are well-suited to the needs of modern-day homebuyers. Features like ambience control, tele-vigilance, climate control, and keyless door entry immediately received an overwhelming response from regular homebuyers in the region, mainly due to the fact that such technology had always been limited to mostly posh villas or luxury mansions and was a rare phenomenon in a reasonably priced apartment like T-Homes. The response remained more or less unaffected even during the tragic COVID-19 pandemic, and within less than two years of its inception, T-Homes had no inventory left to sell.

After the conclusion of T-Homes, T&T Group, in its bid to come up with another innovative housing project, turned its focus entirely towards Eutopia, a luxury housing project, which popularised among homebuyers the concept of Artificial Intelligence-driven wellness housing. However, in an unlikely turn of events, the company was still witnessing – in addition to Eutopia’s success – a huge rise in the demand for homes similar in style and price to T-Homes. Taking note of the situation, the Group then decided to plan the second and a more elaborate phase of Digital Housing – DigiTown.

Incepted mainly to reintroduce with it the convenience of T-Homes, DigiTown – which entered its construction phase last year – is expected to come with multiple upgrades in view of the newly emerging realities after the Covid pandemic. From an emphasis on the importance of homeownership to the rise of teleworking and online learning, the pandemic compelled people to seriously mull over their residence choices, which led to a significant shift in their buying patterns. Taking note of this, T&T designed DigiTown to agree better with the needs of its end-users. Along with a focus on space optimization to accommodate work-from-home realities and ensure a much-needed breathable space for everyone in the family, the project has also planned its digital features to be more intuitive than T-Homes so as to make the living experience of its future residents more comprehensive and accessible.

On the whole, the journey from T-Homes to DigiTown essentially reveals one simple truth: Digital Housing is the need of the hour, and more efforts should be directed towards creating and enhancing its scope in the Indian housing market. In addition to being a more convenient, secure, and adaptable alternative for homeowners, it also presents before society an opportunity to take a major step towards environmental sustainability with its energy-efficient approach, which explains its tremendous success among homebuyers so far and definitely gives it an edge over the practice of building homes the conventional way.