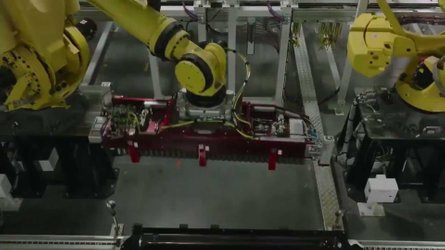 A few years ago, at Tesla’s Battery Day event, CEO Elon Musk and other company executives talked about the brand’s upcoming 4680 battery cells, which it claimed would be revolutionary. Fast-forward to the present, and Tesla just started delivering the first Model Y crossovers that use the new cells and related structural battery pack.

While the general public may not get too excited over watching robots produce battery cells, it really is pretty neat to watch. We imagine that most hardcore EV fans and owners will find it not only informative, but also intriguing. Perhaps one of the many “battery experts” in our audience can pick the video apart and shed some light on it for us.

Tesla delivered the first Model Y crossovers with 4680 cells to employees at its Giga Texas grand opening celebration. More recently, it offered current Model Y reservation holders living near Austin, Texas, the opportunity to change their orders to take advantage of accelerated delivery of the new Model Y Standard Range AWD, which features the battery cells. Since then, it seems at least a few owners have already taken delivery of 4680-equipped Model Y SUVs.

That said, there’s still not a whole lot of official information from Tesla about the 4680 cells and structural pack. However, Tobias Marmann, a Tesla Recruitment Leader at Gigafactory Berlin, shared a short video on LinkedIn highlighting the 4680 battery cell manufacturing process. It’s important to note that the YouTube video at the top of the page is simply an unofficial repost of the original video. We’ve embedded the original, official post below.

As part of his recruitment efforts, Marmann included the following text with the video:

“So mesmerizing to watch. #Battery cell assembly at #Tesla. Also exciting to be working Tesla, where we are at the forefront of production innovation. Many Gigafactories and Megafactories have been announced by others (which is great!), but many are yet to be built.”

During a time when we just reported that Tesla may be looking at potential layoffs, Marmann is encouraging people to join the company’s battery cell team. After reports of Elon Musk citing economic uncertainty as a reason to pause new hires and cut back staff by 10 percent, the CEO shared that Tesla’s total headcount will increase, adding that the salaried workforce should remain “fairly flat.”

While Tesla is currently producing 4680 cells at its pilot line near the Fremont factory, and also at Giga Texas, it has plans to manufacture these batteries at locations across the globe. With two new factories just beginning to ramp up production, it makes sense that Tesla will need to continue with hiring.

Tesla’s Gigafactory in China currently produces both the Model 3 and Model Y. It’s also the EV maker’s official export hub. For this reason, Tesla may eventually decide to produce 4680 cells and structural packs in China, not only for the local market, but also for global consumption. However, we’ll have to wait and see how the process unfolds.

On a side note, when we first watched the video, we thought we had our volume turned down. However, it appears there’s no sound. While it would be nice to hear the sounds associated with the process, the video could also use some sort of a soundtrack. Which music comes to mind for you as you watch the manufacturing process?