Which Version Should You Buy? 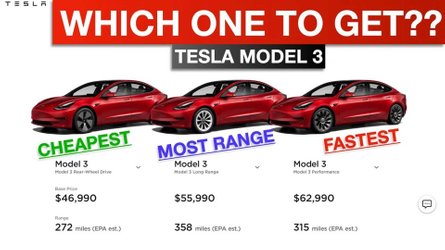 The Tesla Model 3 remains one of the most popular EVs on sale, but which trim level makes the most sense to buy? YouTuber Bearded Tesla Guy outlined his thoughts in his latest video.

He first discussed his own situation. He’s looking to buy a new Model 3, and is open to all three options: the entry-level $46,990 RWD, the $55,990 mid-trim Long Range and top-of-the-line $62,990 Performance. The base Model 3 now features an LFP battery and has a seriously impressive 267-mile estimated EPA range as a result. It’s RWD so handles well and is rather engaging to drive. However, in rougher weather conditions the lack of AWD could be a problem plus for road trips you’ll have to charge more often (although I reiterate 267 miles of EPA range is still quite good and more than most affordable EVs get).

For an extra $9,000 you can have the Long Range. This gives you AWD, a 334-mile estimated EPA range and a marginally quicker 0-60 mph time (the RWD’s 5.8 seconds falls to 4.2 in the LR). However, as mentioned it is an extra $9,000. Given the RWD already has plenty of range and is more than quick enough for most is the Long Range worth almost $60k? Unless you live in an area prone to heavy snowfall, I’m not convinced.

Finally, there’s the Model 3 Performance. Although it’s by far the priciest of the trio, few cars offer equivalent levels of power and speed for under $70,000.

Although Bearded Tesla Guy didn’t get into which Model 3 he reckons is best to buy, personally I think if it’s only going to be your second car and/or you don’t frequently drive long distances the RWD makes the most sense. It gets the same equipment as the Long Range and Performance and only loses out slightly on range. Perhaps if you’re really into driving and can afford it the Performance is your best bet.

But personally I’d save the cash and get the base Model 3 or (if you’re open to non-Tesla EVs) look at a Long Range Single-Motor Polestar 2, which can be had for just $40,900 after the FTC and offers slightly more range than the RWD Model 3. That said, when it comes to Model 3 trims the RWD is plenty quick and has more range than the majority of sub $50k EVs currently on sale.